We had a little bit of extra time this morning to spend in Dunfermline after breakfast, so I went back to the Abbey and the nearby park for a walk before it was time to leave for the next gig. After a short drive we arrived in Birnam with some time to kill and decided to walk to Dunkel, the next town over. Dunkeld clams to be the gateway to the Highlands, though we’re not in the Highlands yet, and the first seat of Christianity in Scotland. Like most of the oldest buildings here, Dunkeld Abbey was built in several phases, the earliest of which little is known. The chapel is still an active church, it’s attached to a medieval nave that’s no longer in use and is under heavy restoration. It’s fascinating to see a very old building that’s been in constant use for centuries attached to an older one that’s positively ancient. It’s a visual reminder of how present the past can be in modern life. The Abbey sits next to the Tay river, which is wide, fast, and black. I walked down to its edge and as I got closer to it I could feel in the air the cold of the river. As black as the river was, I could see leaves clearly in it as they were swept by several feet beneath the surface, they seemed to be suspended in glass. It was striking to be so close to such a dark river running fast right next to the perfect green of the abbey lawn.

The venue was attached to a museum and garden dedicated to Beatrix Potter, author of Peter Rabbit, and many others,  who spent time in Birnam. The garden had a handful of little bronze statues of some of the animals that inspired Potters’ books. Those books were read to me as a child and I read to my kids from the very same copies; so I had kind of a sentimental moment running around the garden.  I found Jeremy Fisher, Mrs. Tiggy Winkles and the Rabbit family before it was time to go inside for soundcheck. Once again, the crowd was absolutely great and made us feel right at home. Thanks, Birnam! The UK crowds are wonderful, but the Scots in particular really know how to make you feel welcome. On to Glenbuchat Hall tonight. 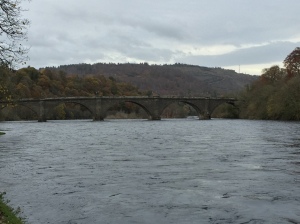 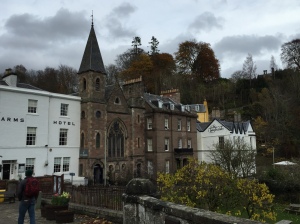