We had our first day in the Scottish Highlands! The gig was in a small place called Glenbuchat Hall in Aberdeenshire. For days we’ve been telling people that we were playing in Glenbuchat and nobody knew where it was. As it turned out, Glenbuchat was just the name of the hall, there is no place by that name. The Highlands were just getting their first coat of snow and were absolutely stunning; steep and rolling, dotted with sheep and stone.

The crowd at Glenbuchat was the best of tour, so far! Shouting and stamping through two sets; they were a joy to play for. And the bottle of whisky in the green room was a nice bonus. Crowds like that make it easy to do your job well when you’ve been on the road for a while.

We had the pleasure of staying in a home after the gig; this particular house had been built in 1604 and despite having been modernized still felt ancient. After the show our hosts got a fire going, it took little time for the entire house to feel perfectly cozy. We enjoyed a bit more of the whisky, we had been treated to a local favorite, and then it was off to bed. In the morning we were able to take a short walk around the property to see the family cemetery and a lone giant sequoia that had been planted by one of our hosts great grandmothers. The tree was completely out of place, but it’s age somehow helped it to look right at home. 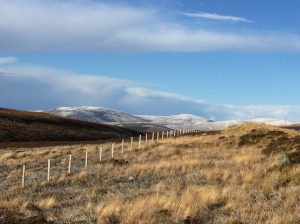