Summer tour is in the home stretch. Over the last month we’ve been all over the; the South, Mid-Atlantic, New England, Alaska, and now France. We’ll be here for a week to play at the Country Rendezvous Festival in Crappone, and the La Roche Bluegrass Festival, next weekend in La Roche. We’re staying in Le Puy for two days, we got in very late last night after about 24 hours of travel. I’ve long since given up trying to get my head around the many time and date changes that occur during international travel. It makes little difference if I know intellectually that I left Anchorage at 3:30 PM on Thursday and landed in Frankfort at around 1pm on Friday after a 9-hour flight (which is exactly what I did yesterday, or was it two days ago? See what I mean?); what my body knows is that is it’s out of time for while, and that’s what I go with. I do my best to get to sleep and get up at a reasonable time once I’m at my destination and take it from there.

That stop in Frankfurt, on the way to Lyon, was a seven hour layover. It was a happy coincidence that Kimber Ludiker happened to be laid-over in Frankfort at the same time. he came over from another terminal to have a beer, and hang out for a while. Little things like that can make a long, lonesome layover much easier. Thanks, Kimber!

This morning we had breakfast at our hotel, breakfast in continental Europe is steps ahead of it’s UK counterpart. Fresh pastries, fruit, yogurt, good coffee are typical. That’s not to say that I don’t like a good English Breakfast, croissant and cafe’ au lait is just more my speed.  After breakfast we walked around Le Puy for a couple of hours, mostly at the market. It’s a cliche’ to talk about the sights, smells, and sounds of an outdoor market, and for good reason. Unfortunately I woke up with a cold and my nose is stuffed up. The only thing I smelled today were some extremely fragrant olives, which I bought. Otherwise, I’ve been limited to sights and sounds, still pretty good. The market was full of stalls heaped with produce, bread, sausage, and cheese (so much cheese!). As I walked past his table, a vendor waved a paper thin slice of fat-dotted sausage, dangling from the end of very long knife, under my nose. It began to melt immediately in my mouth, the layers of flavor unfolding and blooming one at a time. Food like this is more than sustenance, it’s an expression of the place, of the time of year that it was made, and many more things I’m sure I’m not aware of. If you just scarf it down, something I have been known to be guilty of, you miss all of that.

After a lunch of bread, cheese, fruit, and those olives, I went for a run with Leif and Adam, then on a solo trip to the Chapel of St. Michael of Aiguilhe. The chapel, which sits on a towering rock more that 100 feet above town, was completed in 962 and has remained an active chapel since that time. The walk up to the chapel was grueling, but the just view was worth it; let alone the privilege of being in such an ancient place. Standing inside the chapel, it’s impossible to not feel connected to the people who built the place and to those who have inhabited it, despite the vastness of more than a thousand years between us. On the way back to the hotel I walked through some of the older neighborhoods of Le Puy. Ancient towns like this one have a way of leading you into places that feel private, almost secret, if you walk around for a short while. I found myself in narrow alleys outside of private homes. Though open windows I could hear people inside talking and cooking. I paused  few times to soak in those sounds as they rattled through the narrow streets, I felt briefly that I was really experiencing the place. I’m looking forward to more walks when we get to La Roche tomorrow.

By the way, Front Country has been running a Kickstarter campaign to fund the release of our new album. We tracked it in May with Wes Corbett, formerly of Joy Kills Sorrow, at the helm as our producer. It’s loaded with fresh-sounding new songs and tunes, we’re all very proud of it. The tracks are being mixed right now by the extremely talented Dave Sinko, who has worked with Chris Thile, Edgar Meyer, Punch Brothers, and more. We’re extremely excited about this record, and we need your help to release it. We don’t have a label and cannot afford to do it without YOUR help. Please take a moment to visit our Kickstarter page and make a pledge. We have great donor premiums for you to choose from and a promo video which has a few snippets of the music. Thank you! 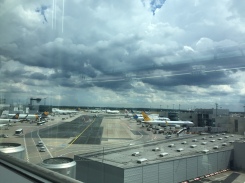 Wonderful piece, Jeremy. Your writing makes your weariness and your sensitivity to place come alive with sights and smells some never find enough time to experience. Thanks. – Ted